In 2006, new legislation of the ‘Euro IV engine specifications’ was put in place meaning that any bus or truck registered after October of that year must be compliant with Euro 4 or EURO 5 and most of which require Adblue (Diesel Exhaust Fluid). And that from January 2011 all new agricultural vehicles fitted with a “Stage 111B / TIER 4 interim” engines will also require the use of Adblue.

The Stage 111B / TIER 4 interim engine calls for a reduction of particulate matter by no less than 90% and of Nitrogen Oxides by 50% compared to the previous Stage 111A / TIER 3 engine levels.

What is ADBLUE?
Adblue, also referred to as Diesel Exhaust Fluid (DEF), is a non-toxic, non-flammable; biodegradable urea and water-based liquid additive that processes the gases in a car exhaust system to remove harmful nitrogen oxide emissions. It can only be used with Selective Catalytic Reduction engines and is injected into the vehicle’s exhaust system. It is a high purity, 32.5% urea solution and is therefore classed as minimum risk in terms of transport.

How does it work?
Adblue has its own separate tank attached to the vehicles chassis (the vehicle frame). The Adblue is then sprayed into the exhaust gas flow where it is subsequently hydrolysed before the catalytic converter breaks down the Nitrogen Oxide into separate Nitrogen and water elements. 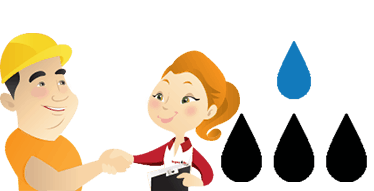 How much is required?
Approximately the rate of Adblue usage is 5% by volume to the rate of diesel fuel consumption, which means that approximately 5 litres of Adblue will be used to every 100 litres of fuel. Most fuel and oil companies will supply Adblue in the following amounts: